Home In the news First women’s drone unit being created 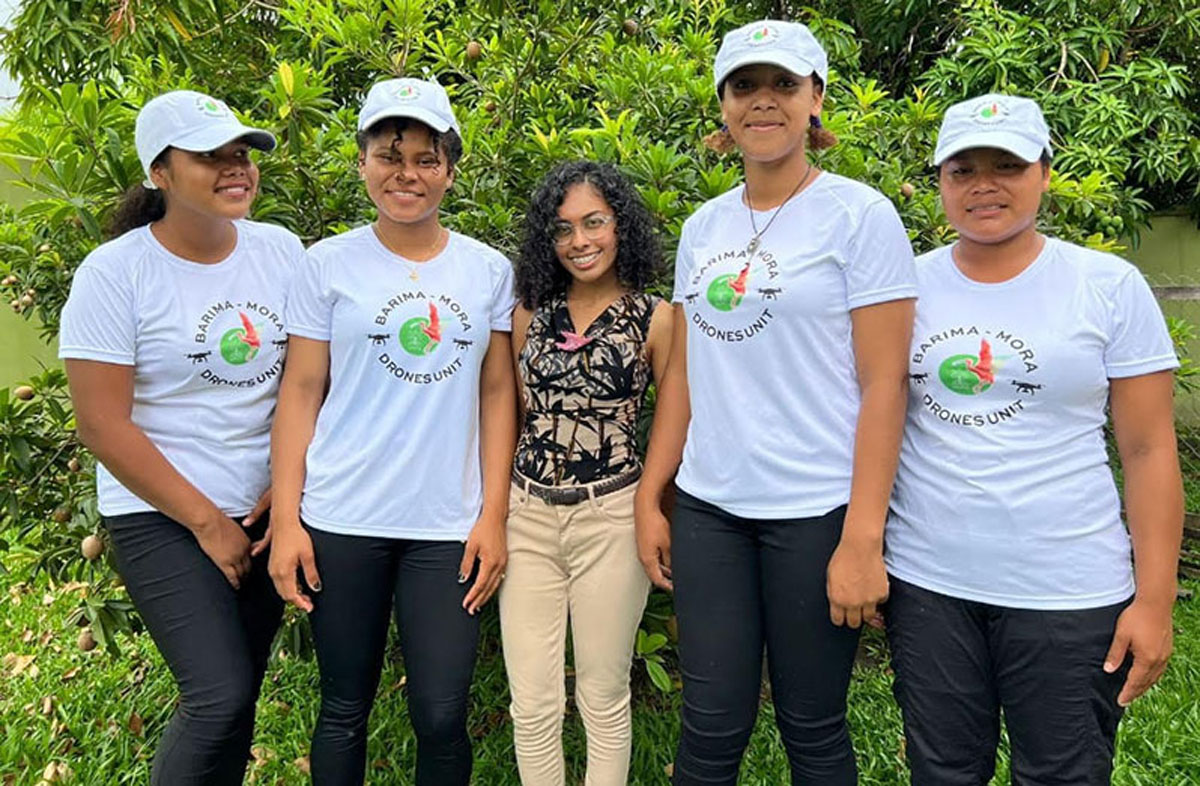 FOUR women are currently being trained to operate drones in Region One (Barima-Waini) as part of efforts to stop the removal of mangroves in that area.

Shakira Yipsam of Arouka Mouth, Olivia Williams and Mariella Campbell of Imbotero and Evonnedy Wells of Smith Creek, were selected through an internship at the Guyana Marine Conservation Society (GMCS) by the organisation’s president, Annette Arjoon-Martins.

They are being trained by Sarah Singh, a drone instructor and final-year marine biology student at the University of Guyana. She was trained to operate a drone by another intern at GMCS along with five other marine biologists/scientists.

Among the six, she was seen to be the most proficient and it was for this reason that she was chosen by Arjoon-Martins to train the four women in Imbetero, a community in the Barima-Mora Passage.

“The Barima-Mora Passage is the largest and most intact mangrove ecosystem in Guyana. It is found in Region One and is made up of four communities. These are Imbetero, Smith Creek, Morawhanna, and Arukamouth,” Singh said.

She added: “This area is made up of a large number of mangroves, mostly the red mangroves and it is biologically diverse with fishes, plants, and animals.”

Singh explained that the red mangroves, which help to prevent erosion — the washing away of the land — also helps to provide habitats for small fishes and crabs.

She said that they also provide wood for the people who live in the village.

“They use the wood to make their houses and to make firewood as well,” she said before noting that from May 9-11, 2022, she and the four women received professional training from GuyDrones on how to operate land aerial vehicles.

“We were trained by Guydrones professionally, but I am training them because I have a better understanding of the drone operations and I have more experience with it,” Singh said.

While the drones are being used for only practice sessions, in the future, mangroves will be monitored because of the persons removing mangroves to clear space.

“They will be used to monitor activities within the mangroves, such as people carrying out illegal activities. They can also be used to take videos and pictures of activities occurring within the villages so that other organisations don’t have to travel there to get those images and videos,” Singh explained.

She noted that the women will also be able to sell their images and videos to earn incomes.

Once they are in possession of video or images of persons involved in the clearing of mangroves, it will be reported either to the village head or the Guyana Forestry Commission for the appropriate action to be taken.

Singh said that the trainees who are “learning fast” are staying at the Imbetero Research Centre.

The trainees said that they are beyond excited to be receiving the training and are happy to be a part of the first women’s drone unit.

This story was first published by Guyana Chronicle